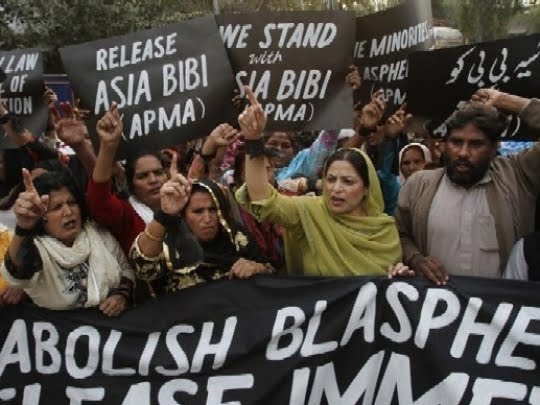 I  would gladly like to remind you that I am a Muslim and I love my religion. I would also like to remind you that I have no relations with people behind the innocent killings. In recent months, the case of Asia Bibi has woken up many minds. Many minds who assume religion as a way to salvation, as a way to making human beings, as a way to establishing harmony , as a way to spreading happiness, peace and equality. Can we say these characteristics match with those happened with Asia Bibi? To my opinion , a big No. By the name Asia Bibi seems to be a Muslim however she is a Christian hailing from Pakistan. She was charged with blasphemy and living in fear for life while awaiting a government decision in a dark prison of some Pakistani Jail. She was supported by a progressive and true Muslim – Salman Taseer (the governor of Punjab) and consequently paid his price of being human. He was killed. The message – Muslims can bear with none where the question of their faith arises.

I remind one small event when I asked one simple question to a friend of mine. The question was whether my beard I would grow could grow to the size of a broom that might be used to sweep the floor. The question put me in danger. The friend of mine was in mood to kill me. The question was just a query out of my curiosity. To everyone’s utter surprise the friend of mine did not pronounce even first Kalima of Islam ( La Ilaha Illallah Muhammadur Rasoolullah – There is no God but Allah and Muhammad is His messenger) . I have cited this event just to show the real pictures of people behind this fanaticism. Fanaticism is not related with Islam in any means. There is no room for these people in the edifice of Islam. Islam is a religion of love , brotherhood, justice and equality. I would like to cite some very important quotations quoted by some non-Muslims thinkers and philosophers. They are –

Mahatma Gandhi, statement published in ‘Young India,’1924.
I wanted to know the best of the life of one who holds today an undisputed sway over the hearts of millions of mankind…. I became more than ever convinced that it was not the sword that won a place for Islam in those days in the scheme of life. It was the rigid simplicity, the utter self-effacement of the Prophet the scrupulous regard for pledges, his intense devotion to his friends and followers, his intrepidity, his fearlessness, his absolute trust in God and in his own mission. These and not the sword carried everything before them and surmounted every obstacle. When I closed the second volume (of the Prophet’s biography), I was sorry there was not more for me to read of that great life.

Sir George Bernard Shaw in ‘The Genuine Islam,’ Vol. 1, No. 8, 1936.
“If any religion had the chance of ruling over England, nay Europe within the next hundred years, it could be Islam.”
“I have always held the religion of Muhammad in high estimation because of its wonderful vitality. It is the only religion which appears to me to possess that assimilating capacity to the changing phase of existence which can make itself appeal to every age. I have studied him – the wonderful man and in my opinion for from being an anti-Christ, he must be called the Savior of Humanity.”
“I believe that if a man like him were to assume the dictatorship of the modern world he would succeed in solving its problems in a way that would bring it the much needed peace and happiness: I have prophesied about the faith of Muhammad that it would be acceptable to the Europe of tomorrow as it is beginning to be acceptable to the Europe of today.”

Michael Hart in ‘The 100, A Ranking of the Most Influential Persons In History,’ New York, 1978.
My choice of Muhammad to lead the list of the world’s most influential persons may surprise some readers and may be questioned by others, but he was the only man in history who was supremely successful on both the secular and religious level. …It is probable that the relative influence of Muhammad on Islam has been larger than the combined influence of Jesus Christ and St. Paul on Christianity. …It is this unparalleled combination of secular and religious influence which I feel entitles Muhammad to be considered the most influential single figure in human history.

Arthur Glyn Leonard in ‘Islam, Her Moral and Spiritual Values’
It was the genius of Muhammad, the spirit that he breathed into the Arabs through the soul of Islam that exalted them. That raised them out of the lethargy and low level of tribal stagnation up to the high watermark of national unity and empire. It was in the sublimity of Muhammad’s deism, the simplicity, the sobriety and purity it inculcated the fidelity of its founder to his own tenets, that acted on their moral and intellectual fiber with all the magnetism of true inspiration.

There is no dearth of statements like as the above for Muhammad. Alas! These words are diminishing now. And responsibility goes directly to those who are doing all this.
Asia Bibi is a simple case of relive. What she said was out of anger and resentment. She should be bailed out with honour in the light of this verse from the Quran –

“But do not revile those (beings) whom they invoke instead of God, lest they, in their hostility, relive God out of ignorance.” (6:108)

There are numerous examples when Muhammad was insulted, abused and even bruised but he neither suggested any sort of punishment nor he took any sort of revenge. In return, those who tried to abuse and insult him, embraced Islam and later proved to be asset for this great religion. There is no room for death sentence for blasphemy in Islam. Islam is religion of God. And Muhammad is the best and most loving messenger of God. Let God decide what He should do who abuses His darling. Beware! He will not leave those even who are doing all this in the name of Allah and His messenger.

Note for Muslims : Whenever name of Muhammad comes we should say Peace Be Upon Him) followed by his name. For non-Muslims it is not essential. It is on their discretion.