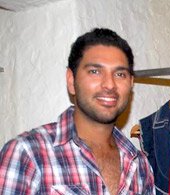 Though it’s is huge difference between Sachin tendulkar and Yuvraj singh is age, but story is almost same matter comes of making come back in the international cricket. Can difference of almost decade of age be compensated or at par of Yuvraj’s illness of cancer or his fight against it or hard work he did or doing for making come back???.  It’s bit confusing for me and very complicated like mathematics. I meant is that when and if he makes come back in T-20 match to be played day after tomorrow against visiting New Zealand, then he will have to face same challenge what Sachin faced recently against New Zealand in terms of foot work, agile, shot selection, decision of ball leaving etc as he will play cricket after nine month and six days (if plays) against Sachins’ six month and almost thirty days. And let me remind you that sachin had to go through that despite of playing in Indian premier league mean Yuvi critics can give more height to his criticism as it can be said that sachin’s feet were not able to reach around pitch of delivery despite of playing Quality (if critics consider I.P.L level is quality) only three month back (he played last i.p.l match on 23 many and started on 23 Aug Against New Zealand). Yes, in comparison with Sachin Yuvi may gain sympathy as he fought hard against as malignant illness as cancer is, but it can’t stop him and help him to face tuff Question to be asked by Kiwis bowlers in Visakhapatnam on 8th September (if he plays and rain allows). There are numbers of blind supporter of Yuvraj in India, who will be expecting seeing in him RAJNIKANT in his comeback match, but critics and former greats like Gavaskar and Saurav ganugly (who termed his selection emotional decision) would be keeping eye on his agile during fielding, his footwork, his exhalation more than impact between his bat and ball and his shots’ renown burly power and timing. No doubt Yuvi is sweating out in N.C.A (national cricket Academy) for a long and has played several practice matches as well to be match fit, but it was not the first class cricket mean no RANJI TROPHY matches. That’s why upcoming two T-20 matches will not less than acid test for him from earlier written aspects let leave alone making runs and form and to minimize this criticism that his selection can’t be termed ‘EMOTIONAL SELECTION’. May God bless YUVE and give him lot of strength in upcoming to ‘test’ sorry t-20 matches.