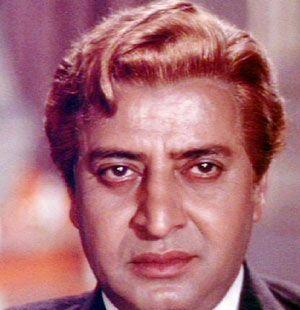 Some actors aren’t just artists we admire, or chessmen in a strange game. They are us, expressing our brightest and darkest thoughts, enacting a gamut of roles ranging from the psychologically complicated to the absolutely simple. They are a bigger us.

Actors are our friends, figures who loom in our lives larger than our actual acquaintances. Pran saab has been one such colossus, his presence affecting myriad generations of film viewers. . In fact, for nearly five decades there was a mysterious, almost magical interaction between him and the audience.

Pran means life. And he has given cinema just that with his seamless artistry. He struck terror in the heart of the audience, assuaging them finally with the moral – ladies and gentlemen, evil does not win.

Screen villainy is a thankless job which Pran saab accepted and carried out with such a degree of perfection that he became the actor the entire nation loved to hate. That indeed was the measure of his extraordinary success. Parents did not want their children to meet him. Occasionally, he would even be feared and dreaded at public gatherings.

Evidently he came to terms with that, bemused with the power of cinema to influence the audience in a way that sketches only a thin line between the real and the reel. Subsequently the thespian turned the tables with a marvellous sleight of hand. He donned the mantle of a character artist with equal skill and felicity. Versatility became his imprimatur.

Circa 1960, I caught my first glimpse of Pran saab. In the course of a fleeting visit to Mumbai, I had requested some family mends to take me to a film shooting. At the R.K. Studio, Pran saab was sitting inconspicuously on a chair, close to a tin shed. He was polite and courteous, he posed for a photograph with us. I returned home with his autograph, a bit disoriented. Like others, I asked myself, “How can a villain be so good and hospitable?”

Now, of course I know better than to mix up the actor with the human being. Ironically perhaps, the shooting at the R.K. studio that day was for Chhalia, the debut film of Manmohan Desai with whom I went on to do quite a few of my most memorable films.

Some years later when I came to Mumbai to seek a film career, I often met Pran saab’s son Sunil ‘Tunni’ Sikand, a close friend of my brother Ajitabh. As an actor trying to find a foothold, my first interface with Pran saab was on the sets of Zanjeer. By that time, he had made an effortless transition from villainy to character roles following his superb performance in Upkar. He had asserted, as it were, that a villain does not have to remain a villain. He had set a significant precedent: Shatrughan Sinha and Vinod Khanna, who began with negative roles, went on to become super heroes.

On the very first day of the Zanjeer schedule, we shot the police station sequence in which I am rude to Sher Khan. I lose my cool and hurl terrible invectives at him. I did feel a bit hesitant to break into a tirade but when I saw him I felt reassured. After alt, it was largely because of Pran saab that I had been cast in Zanjeer. Om Prakashji who had good words for my performance in Parwana had generously recommended me to producers in Chennai and also to Pran saab. In turn, Pran saab backed me to the hilt when the cast of Zanjeer was being finalised.

This was my first film with Prakash Mehra and Salim-Javed. I was relatively new to the film industry, I did feel apprehensive. Pran saab was very helpful, he set me at ease. In fact, he was the biggest selling point of the film. I marvelled at the manner in which he took tremendous care over his look. Right from the hennaed wig and beard to his costume and make-up, he ensured that every element was flawless.

All my scenes in Zanjeer with him were tough. Often during the action sequences, I kept hoping I wouldn’t miss my punch cue and end up hurting him. For one of the sequences, we had to climb up a wall with a rope. He was the first man up. Irrespective of the long and arduous process of getting into his make-up and costumes, he was also the first one on the set. Infallibly.

Even if his shot was over, he would remain on the set, watching the proceedings. with a keen eye. Certainly one of the high-points of the film was the Yaari hai imaan set piece which he performed with imcomparable agility and vigour. Pran saab never interfered with anyone’s work. he never argued “with anyone, he never asked for alterations in the dialogue or a situation in the script and he never once lost his temper. He would complete a day’s work diligently and leave.

Subsequently, I gleaned a little known facet of his during the outdoor shooting spell of Ganga ki Saugand in Rishikesh, Hardwar and Jaipur. Pran saab is hugely fond of Urdu poetry and literature. He keeps abreast of all sports events to this day. At one point, he was fond of shikar. He has an encylopaedic knowledge of sher shairi, folk tales and ribald humour. At get-togethers in the evening, he would enthrall the unit with risque jokes and recitations of couplets.

He would be delightful company after the shoots. He would enjoy his evening Scotch. And he would smoke cigarettes with such a distinctive style that it became his trademark trait, on as well as off screen. Anyone who has seen his performances can deduce that he has given every role a special quality, detailing every character with imaginative little touches. Like the way he rubbed his neck. knowing his character of the dacoit would be hanged at the end of Jis Desh A1ein Ganga Behti Hai.

Throughout an estimable career, he used his eyes, voice, diction, facial mobility and body language to a powerful effect. He could memorise reams of dialogue just by glancing at the sheets of paper handed over to him on the sets, more often than not a minute before the call of lights, action, camera. He never made a mistake, the lines flowing smoothly from a photographic memory.

Whether he was playing a Christian like the endearing Michael in Majboor, the Pathan Sher Khan flicking his hair back in Zanjeer” the street-smart fun person displaying 0 amazing comic synergy with Dadamoni Ashok Kumar in Victoria No.203, the volatile convict in the black-and-white Shaheed or the upper crust father in Bobby, it was evident that he took great pains to differentiate every one of his characters, thus giving them a new and always credible edge. Even if he was saddled with a stereotyped role, like all actors are on occasion, the part received a fresh interpretation and impetus.

I had the privilege of working with Pran saab in severa! films including Amar Akbar Anthony, Kasauti,, Majboor, Don, Kaalia, Naseeb, Nastik, Sharaabi, Andhaa Kanoon, and Inquilab. For the climax of Naseeb, located in a revolving restaurant, he went through training in sword fencing. He had swashbuckled expertly before in the movies but being a stickler for doing the right thing, he insisted on a fortnight of re-training. The last time we worked together was for Mrityudaata, in which he graciously assented to . play a cameo part.

Through all the films we worked on, it was clear that he is a man of principles. If there was a particular line of dialogue or a situation in any script, bordering on the crude or which was socially and morally objectionable, he would comment on that immediately. He wouldn’t get into an unresolvable conflict with the writer or the director but use fair reason and logic to stress his point of view. That is why every film-maker knew that Pran saab would go this far and no further, he had demarcated a boundary for himself, whereby he would not do anything that was vulgar or unaesthetic. .

Pran saab is extremely shy, opening up essentially when he knows he is among friends  and like-minded colleagues. He has been one of my kindest guides and masters. On the films we did together, if he ever felt that I could improve upon a take, very apologetically he would murmur, “Don’t misunderstand me… but why don’t you try it that way?” If he was pleased with my take, he would never fail to compliment me.

Curiously, Pran saab would never see his own films. It was nearly 20 years after the release of Zanjeer that he saw the film accidentally. He called me to say, “I liked your performance.” It felt wonderful even if his compliment came two decades later.

That Pran saab was an astute counterfoil to the great stalwart actors is apparent to any film aficionado. Chameleon like, he could change his demeanour and outlook by simply wearing a thick pair of glasses or donning jodhpurs and leather boots in the vintage entertainers, while representing a supreme challenge to the widely idolised heroes. As the tormentor of Dilip Kumar saab in Ram aur Shyam and the hurdle in the way of Dev Anand saab in the black-and-white Jab Pyar Kisise Hota Hai, Pran saab held his own right till the finale when he may have lost the battle but triumphed immeasurably as an actor.

From him, I have learnt that professionalism is an actor’s main qualification and strength. There was never a day when he reported late, never a day he cancelled a shoot because he was feeling under the weather. One day, he was on the sets, exceptionally reserved and uncommunicative. After hours when he continued to be in a shell, the director asked him if something was wrong. Pran saab very quietly said that he had just lost his brother but he didn’t want to cancel the shoot because life must go on.

Among his closest friends were the late Satish Bhalla and Yash Johar. Not given to flamboyant tastes, Pran saab has led a life of self-respect and dignity- I have never heard him asking for a favour. Rather he has .been a man and actor of strong convictions and values. His appeal has transcended fads and trends. Regrettably, he has not received an iota of the recognition which he deserves in abundance.

Needless to emphasise, the longevity of his tenure and his abiding dedication merit official honours and awards which have largely been denied to him. As they have said of so many grand character actors in the west, they don’t make them like him anymore. An artist of his stature would have been lionised in the U.S., Europe, wherever. Alas, here acknowledgement has been grudged to him. Inexplicably.

The book chronicling his life and career, which his family has so thoughtfully published, is a heartfelt hosanna for Pran saab. I am proud to be associated with the endeavour and wish Arvind, Sunil and Pinky (Pran saab’s children) the best for honouring their father in this valuable and much ­needed manner.

Cinema may change both in content and technique. But nothing can take away from Pran saab’s boundless contribution to Indian cinema. Whenever he had to climb up a wall, he left us, another generation, behind. He was always up first.

Sir, thank you for giving us all so much of yourself, without ever getting anything from us in return. You are our inspiration, our Pran saab.