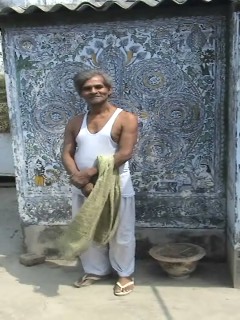 Mithila school of paintings, in its tumultuous march towards commercialization, has carved out a niche in the global art horizon. In the process, though Madhubani proved to be the formidable fortress, Barheta citadel marked its presence with a bang in the Mithila canvas. Socialization of this art form, without compromising the synergy, saw a new dawn in Barheta, a tiny village.

Situated on the banks of Bagmati in the outskirts of Darbhanga, this village is bubbling with hope. Women from different strata of society today not only see the realization of their dreams but dare to speak about the future with confidence. Keeping inhibitions at bay, they talk of a new way of life.

Bina paswan, of Alha village, gives credit to the Bharti Vikas Manch of Barheta. The organization was founded in 1981. The objective was to provide education in Mithila paintings and generate avenues of income. Its founder Krishna Kumar Kashyap, coined the slogan ‘earning while learning’. Reminiscing the days he says—“ It was a daunting task……Mithila art could fetch them bread and butter was unthinkable for them”.

Women, mostly picked from deprived sections, were a bit hesitant initially. Baptized in socialism, Kashyap, took it as a challenge. Passion paid the result. He consciously transformed Mithila art and incorporated Godna( traditional tattoo ) patterns in it. But this simplification effort was not enough to catch the fancy firmly. Himself a veteran artist, Kashyap then turned Mithila art and its Godna variant into utilitarian mode. According to him, this was a satisfying step forward, for it was now congenial for both elite customer as well as the common buyer.

Bina Paswan has never looked back since then. She now fervently expresses her realm of life and aspirations in her creations. And, she is not alone in this path. Scores of women in rural areas are engaged in this pursuit through 23 centers of BVM in different districts of the state. Even muslim women are engaged in these centers. BVM takes pride in popularizing Godna painting.

Barheta stream is also pioneer in devising academic curriculum for Mithila school of paintings. Books such as ‘Maachh-Bhaat’, ‘Mithila Chitra Shiksa’, ‘Mithila Chitra Praveshika’, ‘Mithila Chitra Kor’ etc have been published. Books of special importance named ‘Geet-Govind’ and ‘Meghdoot’ have also been published. These two books are part of a series being brought out by Kashyap and Shashibala, the ‘Guru- Shisya’ duo. Ethnic ideas of the artist Shiva, who hails from Jitvarpur, are also being taken for this ambitious series.

Hallmark of the series are, thematic translation, eye-soothing illustrations encompassing designs and motifs from all the variants of Mithila paintings, and last but not the least, the use of hand-written texts. Elements of the life of Mithila, have been intertwined giving cushy touch. It can safely be described as Mithila brand ‘Meghdoot’ and ‘Geet-Govind’. Kashyap is of the view that Mithila painting connects Jaydev and Vidyapati. Obviously, Vidyapati is next in the list of poets in the series. The work on Vidyapati is in full swing.

Kashyap has traveled to European countries on many occasions to teach and propagate the Mithila art. In August this year, he will be on a trip to Italy and Spain. After returning from abroad, he will be presenting a detailed proposal to the government, for the establishment of an Art University for Handicrafts in Mithila. Once a school dropout, Kashyap had himself cherished to convert Bharti Vikas Manch into a universal knowledge center of Mithila art and crafts. But financial bottlenecks thwarted him. He firmly believes that Mithila art has the potential of becoming a tool in the conservation of natural resources of this region.