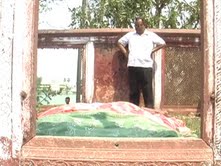 William Dalrymple , the author of ‘ The Last Mughal ’, did not appreciate the state of history writing in India. He is pained that such writings ignored the sense of history of Indian people. Dalrymple would have tempted to change his faith in Indian people’s sense of history, had he ever visited Darbhanga. Yes, the last of Mughals did stay at Darbhanga for odd 29 years but denizens here, at large, are unaware of it. Yes, Darbhanga proved to be the last outppost of the main branch of Bahadur Shah Jafar’s dynasty.

Jubairuddin Bahadur Gurgan, the grand-son of Bahadur Shah Jafar, took refuge in Darbhanga in 1881, and stayed till his death in 1910. In fact, the Britishers were hankering after the blood of members of Bahadurshah family. But , Laksmiswar Singh, the Maharaja of Darbhanga, not only gave shelter to him, but assured him of full security. According to Mustaq Ahmad, the author of Atish-e-Pinhan(portraying the life of Jubairuddin), Laksmiswar Singh had connections in the House of Lords.

“Mauz-e-Sultani sheds ample light on the administrative situation in different riyasats, where as Masnavi talks about Raj Darbhanga and the strings of Mithila culture in great detail….these books are treasure trove for historians ” said Mustaq Ahmad.

Kalyani Foundation, run by Maharani of erstwhile Darbhanga Raj, published Mauz-e-Sultani recently. But this is based on the copy of Mauz-e-Sultani preserved in Khuda Baksh library of Patna. According to Paras, the librarian of Kalyani Foundation Library, one of the original copies of Mauz-e-Sultani is in the possession of Raj family. Mustaq Ahmad corroborates this and claims to have seen the original copy in the library of Kumar Shubheswar Singh. He said that this copy exibits the signature of Jubairuddin.

William dalrymple mentions about Dara Bakht, but is silent on Jubairuddin. Lala Sriram in his book ‘Khum-khan-e-Javed’, published in 1917, from luchnow, gives the genealogy of Bahadur Shah family. This book refers to Jubairuddin as the successor of Mughal throne( in third volume, page 618-19). Dara Bakht, the eldest son of Bahadur Shah , had died before the 1857 mutiny. So according to Mughal tradition, Jubairuddin, the only son of Dara bakht, was heir to the throne at Delhi. But the mutiny had changed the scenario. Five sons of Bahadur Shah were butchered by Britishers near ‘Khooni Darwaja’ in Delhi. Rais Bakht, the only surviving son retired to Calcutta in ‘Matia Burz’ locality. He died there in 1861.

A house was built for him by Laksmiswar in Kazi Muhalla, now a days known as Kathalbari. This place is adjacent to the Raj campus. A mosque was also built for him. The two sons of Jubairuddin died of Cholera in 1902. His wife also died the same year. Jubairuddin breathed his last in 1910. His mortal remains were buried on the bank of Dighhi Lake near Darbhanga junction. A mazaar, made of red sand-stone, was erected over it in 1914 by Raj family.

Visiting this mazaar can stun any one. It bears a deserted look. The ornate ventilations in the railings are broken from many places. Thorny shrubs abound inside it. Steps leading to it have cracked. The beautiful arc over the door is withering. Usmani, the caretakerof this secluded place is ignorant of the importance of this structure.

Very few Darbhangans know about this heritage. The discarded and degraded sight speaks volumes on the apathy in conservation efforts of monuments in Bihar.